Internal Clocks and the Human-Animal Bond

Particularly in areas with temperate climates, November is a transition month. In the northern hemisphere summer has yielded to fall and signs of winter become more common. In the US, November also signals the arrival of that abomination known as the time change. It’s an abomination for two reasons:

As a I read an overview of these many functions in the September/October 2015 Scientific American Mind (“Out of Sync: How modern lifestyles scramble the body’s signals” by Emily Laber-Warren, the obvious question popped into my head: If digital devices and 24/7 lifestyles are messing with our physical and mental health, are they messing with those of the dogs and other diurnal animals who live with us? I’m going to limit this discussion to dogs and other diurnal animals physiologically predisposed to daylight activity like we are. That means not cats because the feline nocturnal heritage most likely results in an internal timing mechanism that manifests differently from those of daylight-active animals.

Regardless what side of the animal research fence you come down on, the fact remains that a combination of human and non-human animal studies provides information about members of both groups that we wouldn’t have access to otherwise. As a veterinarian, I’m happy to see research that reveals more about how the internal clock works, including the health and behavioral problems experienced by individuals when thecircadian (or daily) clock is disrupted. And as a veterinarian with a long-standing interest in the health and behavioral effects of the human-animal bond, the idea that something so basic as when we chose to go to bed and to get up, and when we eat and feed our animals could have such far-reaching effects is mind-boggling because it’s so simple.

The internal clock resides in the brain’s suprachiasmatic nucleus (SCN). In a very small nutshell, the SCN consists of a small cluster of cells located in the hypothalamus. In addition to processing, or more likely because it does process, incoming emotions, the hypothalamus plays a critical role in multiple endocrine disorders. These include adrenal gland-related diseases like  Cushing’s and Addison’s diseases and those related to thyroid gland dysfunction. Simultaneously the little SCN controls the cycles and maintains the rhythm of many physiological and behavioral functions. Some rightly compare its function to that of a conductor signaling the entrances, exits, tempo, tone and volume of multiple instrument sections and hundreds of musicians, to produce a coherent symphony.

Although we may chose to ignore our internal clocks we, like all living beings, owe our existence to our ancestors’ willingness to work within the boundaries of theirs. Those with an interest in nature can see evidence of this natural clockwork everywhere.  Daily cycles that prepared plants and animals for mating and reproduction in the spring, are now preparing them to slow down and in some cases hibernate as the days get shorter.

But how does the SCN manage so many different cycles affecting all parts of the diurnal human and animal body? Unlike the clocks on bedside tables or in watches or cellphones, internal clocks turn genes on and off. In 2014 a team of geneticists at the University of Pennsylvania reported their findings regarding this activity in “A circadian gene expression atlas in mammals: Implications for biology and medicine”. These included that timing-related changes occur on the cellar level. When the researchers studied genetic changes in the RNA from 12 different organs (adrenal gland, aorta, brainstem, brown fat, cerebellum, heart, hypothalamus, kidney, liver, lung, skeletal muscle, and white fat) that occurred at 2-hour intervals, they discovered that the organs didn’t maintain a steady level of activity throughout the day. Instead, the organs alternated between periods of activity and quiet. They also engaged in different activities during the day and night, and experienced periods of enhanced activity at dawn and dusk.

What are the practical implications of artificially disrupting our natural clocks for us and our diurnal companion animals? (Ours by choice or necessity, theirs by virtue of living with us.) An estimated 27 million Americans have work schedules that run counter to their internal clocks. Research indicates that the resultant circadian misalignment plays a role in a wide range of health issues including diabetes, obesity, cancer, heart problems, infertility, depression and other mood disorders, plus mental decline. That’s quite a line-up!

In addition to work or social schedules confusing our natural clocks, the SCN responds the same way to the blue light emitted by our electronic devices as it does to daylight: it tells the biological clock that it’s time to get up or keep the body (and all its organs) in daylight activity mode. One can only imagine how much routinely falling asleep with the television on or checking for email or text messages throughout the evening and even the night disrupts the internal clock!

In addition to artificially turning daylight on and off via our devices undermining the natural clock’s ability to do its job, when we eat also can rattle it and disrupt normal body functions. We diurnal animals evolved to eat and digest food during the day and fast at night. Human and animal studies reveal that when individuals are kept in constant light or forced to eat during their natural resting times, they’ll gain weight regardless how many calories they consume. This apparently occurs because the level of leptin—the hormone that triggers satiation—decreases when the biological clock goes haywire. As a result, we eat more. In one experiment in which 10 healthy people were kept in constant low light while their mealtimes and sleeping patterns were scrambled for 10 days, they tended to overeat to the point that 3 of the participants became pre-diabetic by the end of the experiment.

Now if you’re like me, your animals are more or less on the same schedule you are. Most people typically let their dogs out when they get up and before they go to bed, but when they get up or go to bed may fluctuate wildly. While some of us may skip breakfast, most of us do feed our dogs in the morning and especially so if we feed them twice a day. If they only get one meal a day, when we feed it depends on when it’s most convenient for us. The two groups of dogs I’d like to see studied are 1) those whose caregivers  take them out and feed them randomly because those people have no schedule of their own, and 2) those who feed their pets, including treats or snacks, later in the day. Would the dogs in either of these groups experience more health (including overweight and obesity) or behavioral problems compared to those on more natural schedules? The preliminary data suggests they might. But unless we acknowledge the existence and role of the internal clock in companion animals, we’ll never know.

Laber-Warren includes a list of tips for human circadian health in her article that merit consideration for our dogs and other diurnal animal companions too: 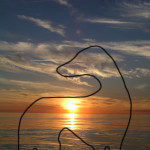 For thousands of years the early morning sounds of birds other and diurnal creatures stirring as the sky began to brighten undoubtedly signaled the beginning of the diurnal human and canine day. Less than a century ago, the bulk of the human population awoke to those same sounds or those of roosters heralding dawn on the farm or ranch. As the sun went down, everything in the diurnal world slowed down.  We may tell ourselves that technology enables us to ignore our internal clocks and those of our diurnal animal companions. But as the  cost of doing so mounts up, becoming more in sync with those clocks truly could be the better option.