I’m one of those people who enjoys optimism far more than pessimism. And because the animal transport scene sometimes really gets me down, I decided to list the benefits I’ve gained since this process began. I limit these remarks to those benefits related to transport dogs. Even though I know it’s not true, for sanity’s sake I choose to remain in denial about transport cats for now.

One:  Transport dogs routinely force me out of my comfort zone. Unlike the days when the canine population consisted of a combination of mixed and purebred animals primarily of known local origins, the dogs I see now literally could come from anywhere in the world. Many come with no, little, or unreliable histories. Increasingly I see what I suspect are cyclic rescues, dogs who have been rescued, then given up to or picked up by area shelters which then present the dogs as local. The shelters don’t do this to deceive potential adopters. They can only work with what they know which usually means the address of the previous owner to the area where the stray or abandoned animal was picked up.

Two: Transport dogs make me more thankful than ever for my background in ethology. Thanks to it, I can engage in behavioral back-engineering. That is, I can get a better idea of what kind of life the transport animal was adapted to before capture. For example, comparing the transport dog’s behavior to what I know about that of free-roaming scavengers, small game predators, cooperative hunters and opportunists provides insights into the transport dog’s pre-capture orientation and experiences that I wouldn’t have otherwise.

Three: Transport dogs also expose me to a greater range of canine behaviors than that seen in the pet dog populations. Yes, even dogs from long lines of companion dogs normally can fall anywhere on the solitary-social spectrum. But dogs from strong companion lines also are likely to possess the genetic predisposition and modeling opportunities to adapt their respective social orientations to live in human-controlled environments. On the other hand, other expressions of those same orientations may enable dogs in free-roaming backgrounds to survive independent of close human ties.

Four: Transport dogs taught me that they’re all mixes unless they come with valid DNA tests or pedigrees. Aside from most of us being notoriously inaccurate when it comes to identifying breeds or mixes thereof, transport dog breed assignment may reflect more marketing acumen than canine knowledge. In the dog marketing world, every black dog with longer ears becomes a black Lab mix and every yellowish-brown one, a golden mix of some sort.

Five: Transport dogs additionally teach me more about the limits people and dogs place on the human-canine bond. Dogs from free-roaming roots may not give people as much wiggle room as will many dogs with strong companion dog breeding. Granted most dogs will resist giving up their independence and protective roles (and all the problem behaviors that go with these) unless given sufficient proof that any humans in the household are willing and able to assume that responsibility. This makes sense because doing so means trusting those people with their own lives. In my experience though, many transport dogs from free-roaming backgrounds take longer to convince. I suspect this occurs because they know from experience and genetic predisposition that they don’t need people in order to survive. This leads to…Four: Transport dogs taught me that they’re all mixes unless they come with valid DNA tests or pedigrees. Aside from most of us being notoriously inaccurate when it comes to identifying breeds or mixes thereof, transport dog breed assignment may reflect more marketing acumen than canine knowledge. In the dog marketing world, every black dog with longer ears becomes a black Lab mix and every yellowish-brown one, a golden mix of some sort.

Six: Transport dogs daily add to my knowledge of what can happen when human and canine expectations don’t match. Sometimes people emotionally rescue instead of adopt these animals. In today’s society, rescue elicits images of heroic acts, public acclaim, and then moving on to save someone or something else. It’s a short-term phenomenon. One may be highly committed to the process of rescue, but commitment to any single animal involved in it may be minimal. However, turning a successful free-roaming dog into a successful house pet requires a long term commitment, patience, and hard work. Once this difference between what it means to rescue such a dog versus live with one 24/7 with minimal public support becomes clear, summoning the wherewithal to change the animal’s behavior may be difficult for adopters who perceived themselves as rescuers.

Seven: Transport dogs have convinced me that attachment disorders can and do occur in some young animals from chaotic backgrounds just as they do in some kids. For more profit-oriented rescuers and transporters, puppies are high-ticket commodities. Adopters often prefer 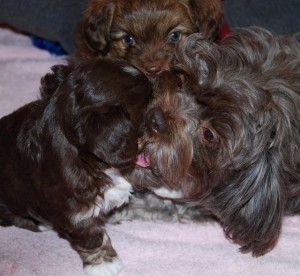 puppies because contemporary dog lore erroneously may portray all puppies as highly malleable furry beings we can mold into anything they want. However, this flies in the face of everything we know about the role of quality maternal care and early animal physical and mental development. Consequently, the belief that capturing a bitch with her puppies, separating them asap, then vaccinating, worming, spaying or neutering, then putting the puppies into a holding facility for a couple days before shipping them wouldn’t emotionally and mentally damage some of these animals seems far-fetched.

Eight: The numbers and multiple sources of transport dogs spur me to keep as current as best I can about diseases and parasites that may affect dogs in all parts of the country as well as the world. Do the animals from other areas have natural immunity to diseases that my local canine population may not? Are there diseases or parasites these animals might carry that could be transmitted to some segments of the human population? Are these animals being screened for these diseases and parasites in their places of origin? Do tests to screen for these diseases or parasites even exist?

Nine: And finally, transport dogs daily teach me the lesson of acceptance. With each contribution to my knowledge of animal behavior, health (including human), and the bond I gain from these animals, I learn to accept the many unknowns that surround them.  I also accept that I can’t transform them into cuddly pets instantly and, in some cases ever, regardless how much their adopters want me to do this. When it’s possible, I need those people’s desire to share their lives and their commitment to the dog for however long it takes to make it happen. When it works, it’s beautiful. When it doesn’t, all I can do is do my best, accept that sometimes this won’t be enough, add what I learned from the experience to my mental canine transport database, and move on.